I first met David Bertram when my Mum & Dad took me to Charterhall in Berwickshire, Scotland to watch my cousin David ‘Bim’ Bertram race his Lola Mk1.

Charterhall was an old WW2 airfield in Jimmy Clark country near Duns and to make it into a race circuit it only required a few hay bales to be placed strategically and everyone just took their chances.

These are the photos I took with my Kodak Box Brownie: 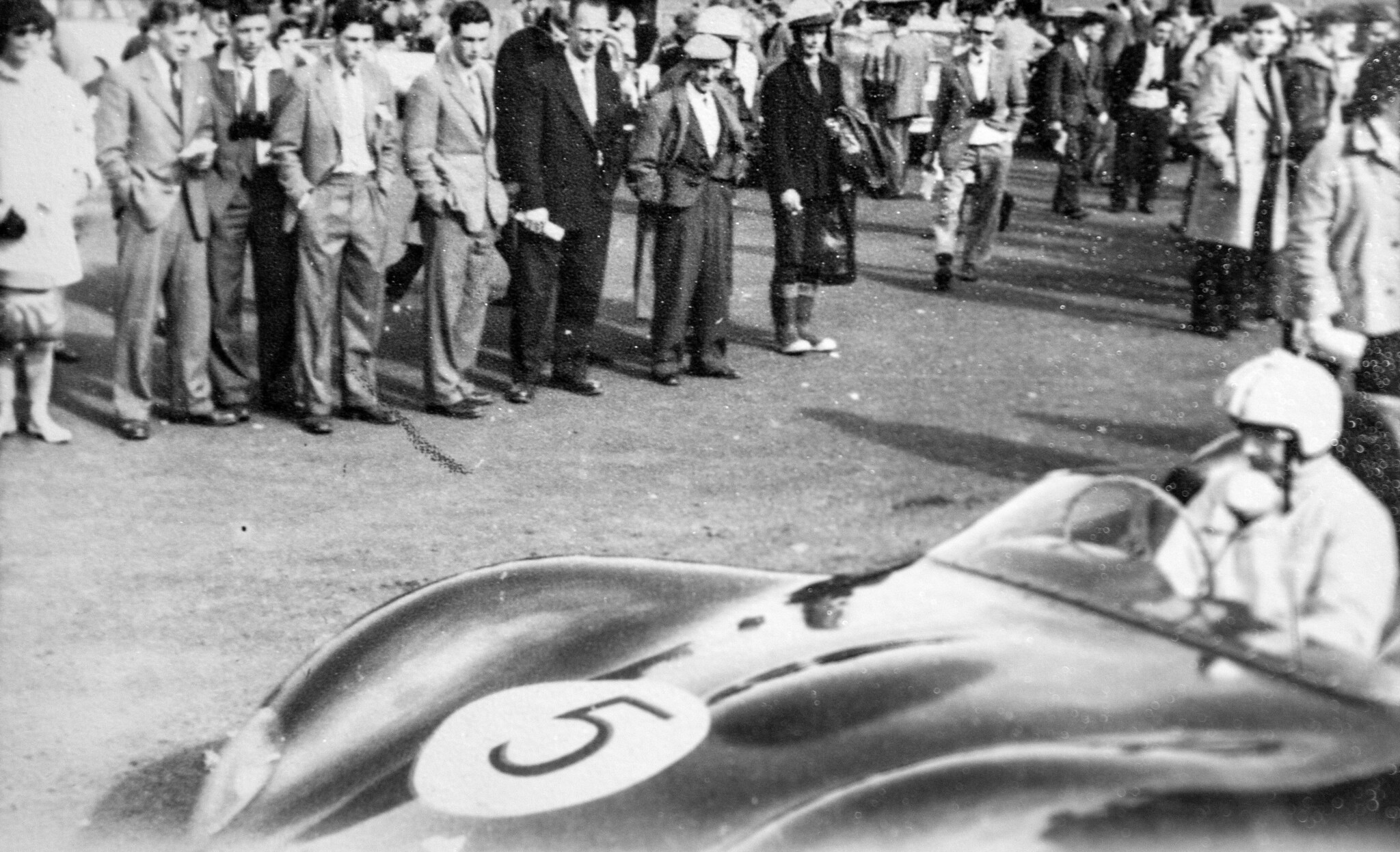 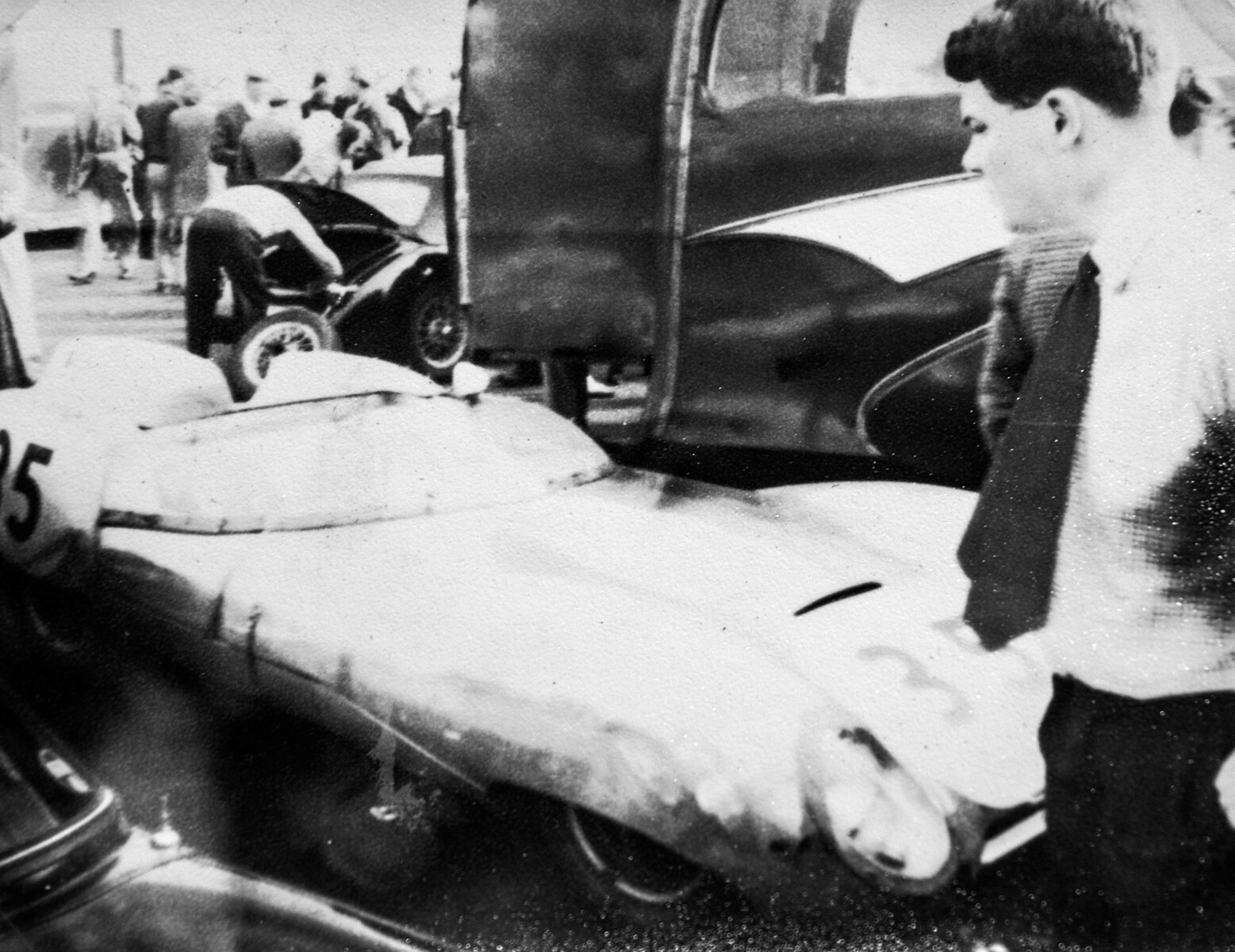 This is a link to the video my Dad took of the event.

A while later in the 1960’s Mum took us up to stay with them in Edinburgh. Her mum had been Lena McNab and her sister Elizabeth had married James Bertram, David’s father.

I remember a very smart Peerless GT and an Isetta Bubble car which Bim told me was prone to rolling over. Luckily it was fitted with a sunshine roof which could be rolled back and pedestrians could then be asked to put it ‘back on its wheels’.  Great fun!

In 2008 we were in Northumberland and thought we’d see if we could track them down. There were 20 Bertrams in the Edinburgh phone book and the first one I called a lady answered and I said: “I wonder if this is the Bertram that used to race a Lola?” Julia replied “That was a long time ago”. We got together for lunch at their place and filled in the last half century and a lot of racing experiences on both sides.

Bim got his photo album out and some of the pics are here.

The brothers had started motorsport in club events and rallies and The Motor World of the day showed all three in Triumphs in the Scottish Rally: 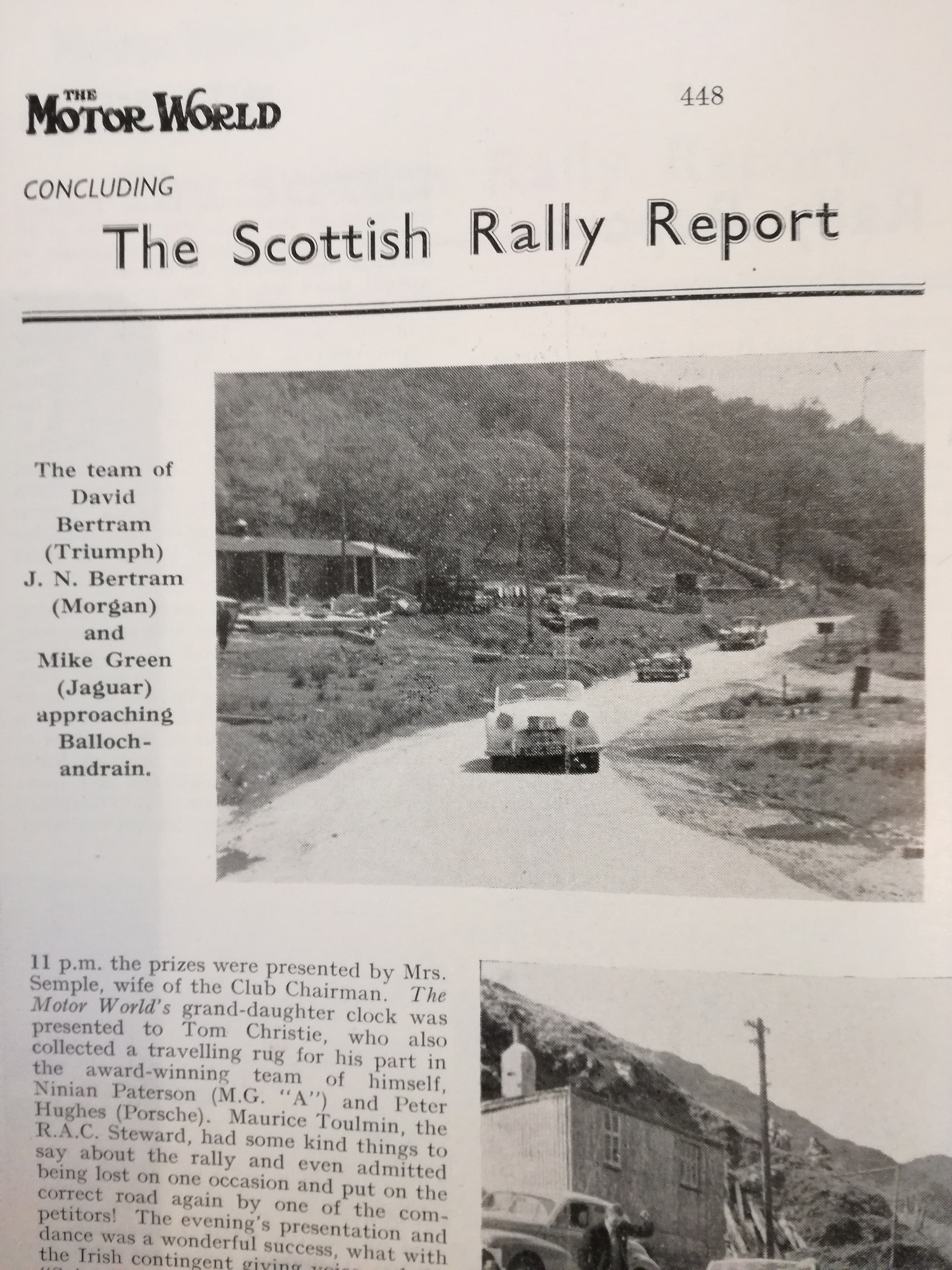 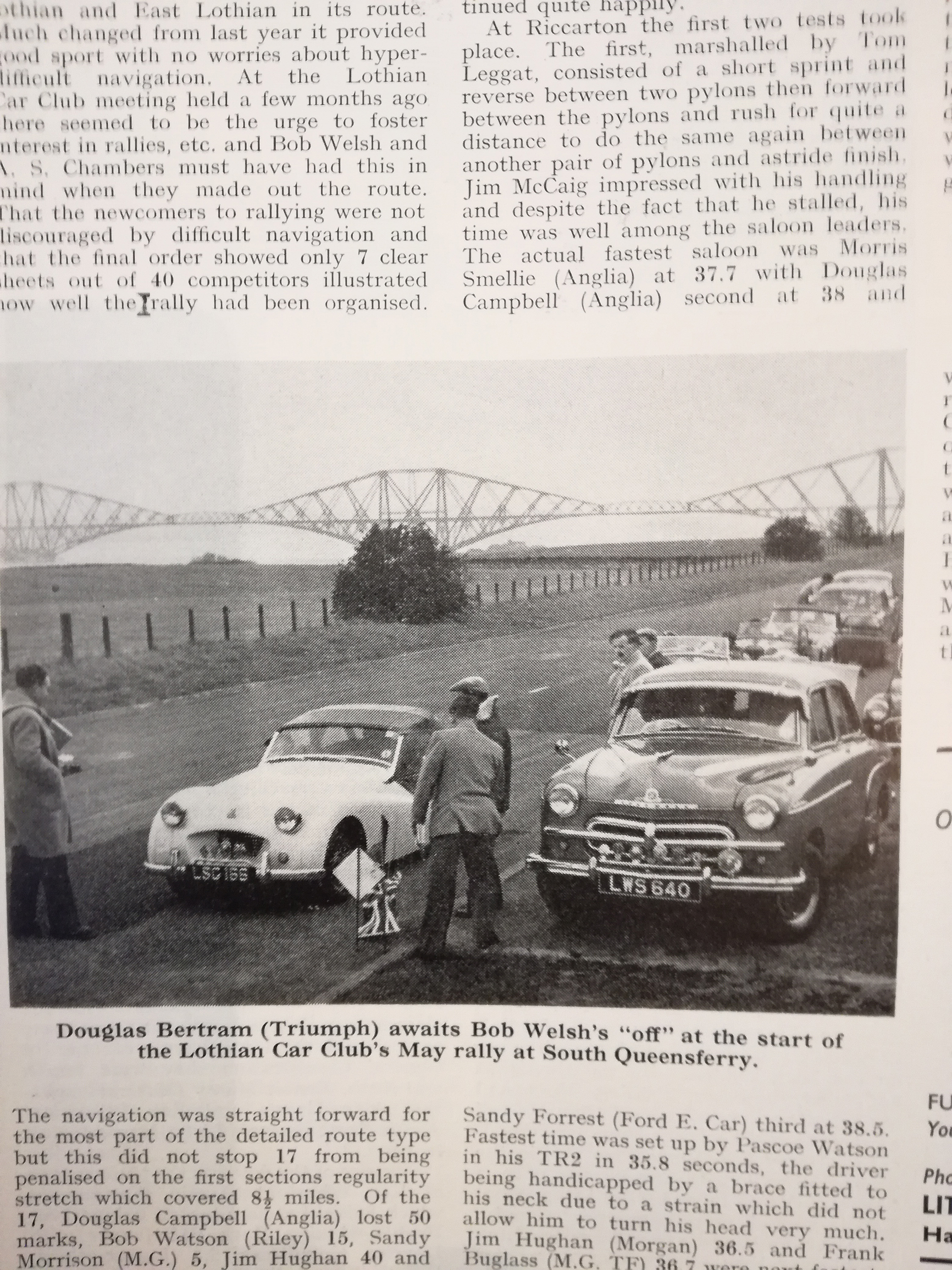 Julia had joined the Ecurie Ecosse Association as her first job after Uni and ran their newsletter.  She met David through the team.  This was our blog post from that visit: 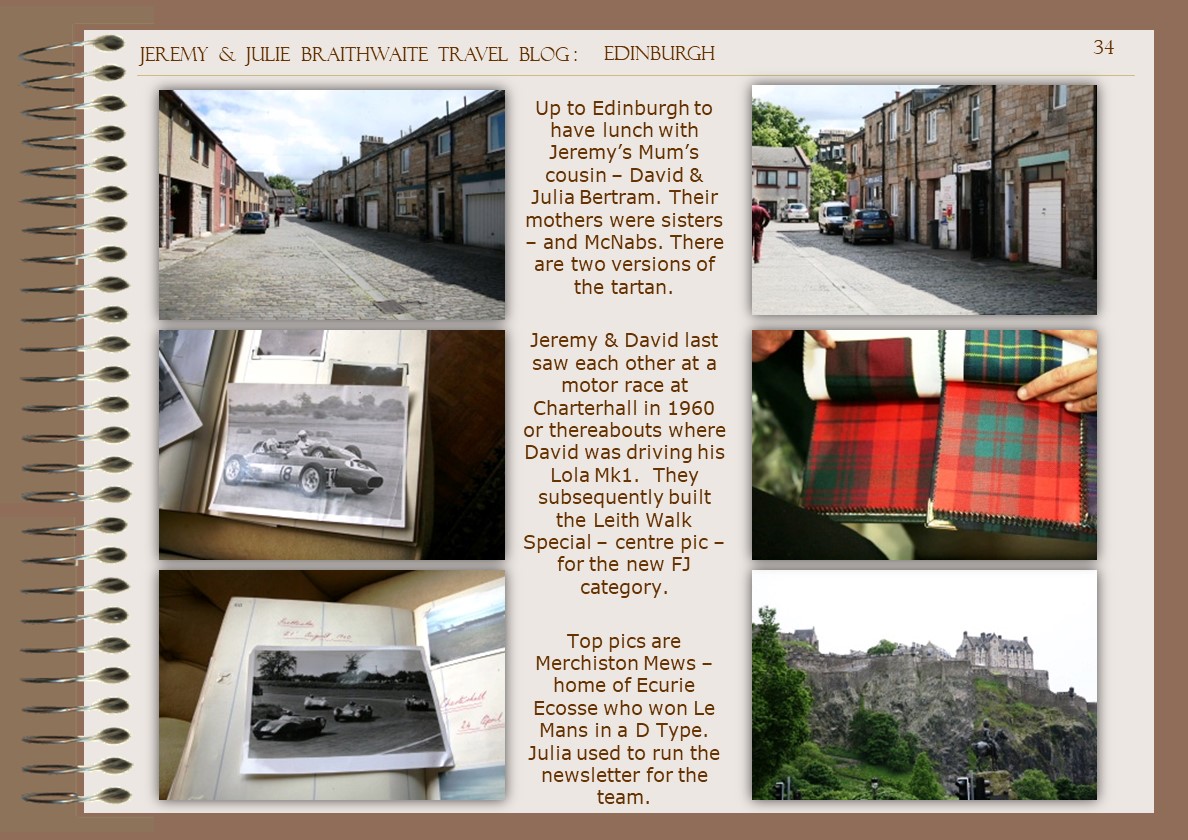 David & Julia’s daughter Sue had moved to Melbourne and we talked on the phone and all kept in touch by email and it wasn’t until 2016 that we all got together. A year later David died and Sue asked me whether I had any photos that could be used for the service.

I tracked down Graham Gauld who had been involved with Ecurie Ecosse over the years and wrote the definitve book on the team. He kindly obliged and sent three photos, with the first being David in the bubblecar doing a motorkhana.  It’s a cracker: 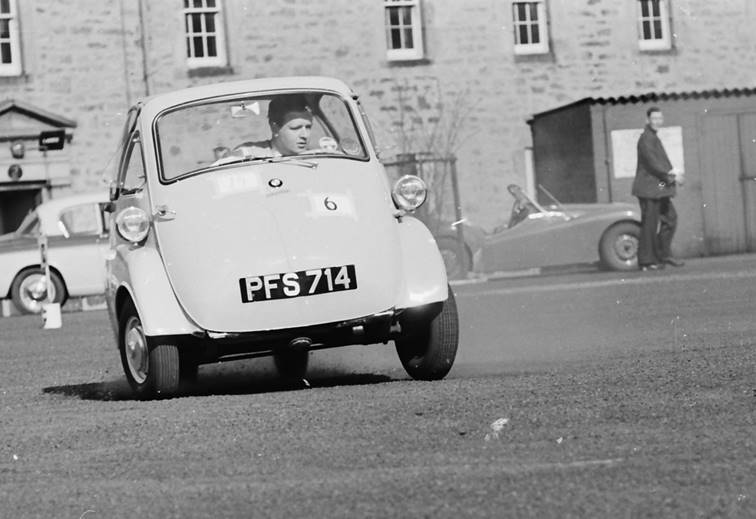 The next two photos were of the Leith Walk Special, a very early Formula Junior that was build at the works.  The family made paper making machinery  in Leith Walk and employed a large work force and mechanics Peter Beaton and Bill Turnbull were both on staff: 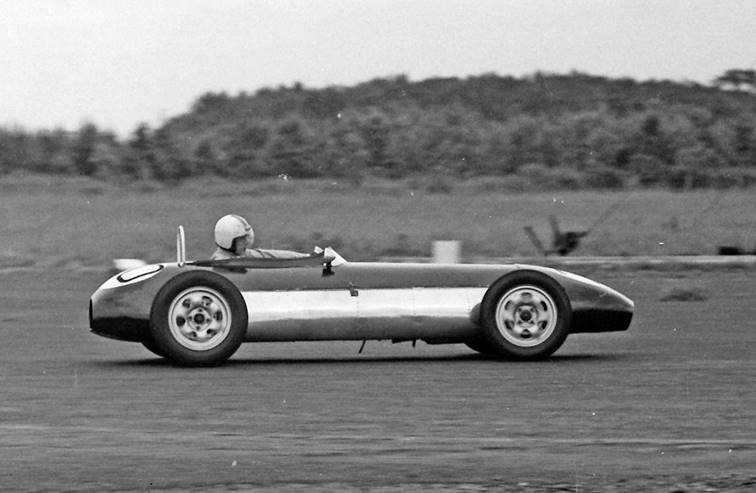 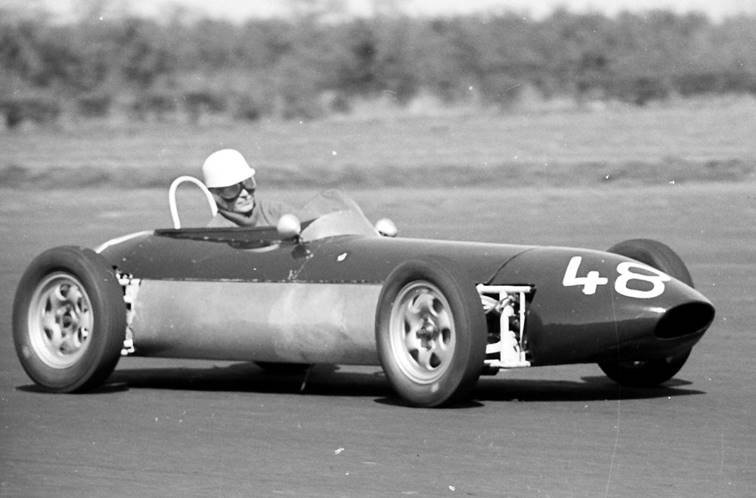 There is quite a bit of background in this thread from the old Atlas F1 forum:

In conversing with Graham Gauld he said I really should get a copy of his book ‘Scottish Motor Racing and Drivers’ as this had more than half a page devoted to the two brothers. I naturally agreed and Graham quoted me a price and said he’d get a quote for postage. The French post office quoted an outrageous amount and I suggested that should be enough to buy him lunch and could we pick up the book when we would be in the south of France in a couple of months time. Here we are with Jane Wallis-Hosken, Julie and Graham at their house in Clavier after a nice lunch at the Old Mill: 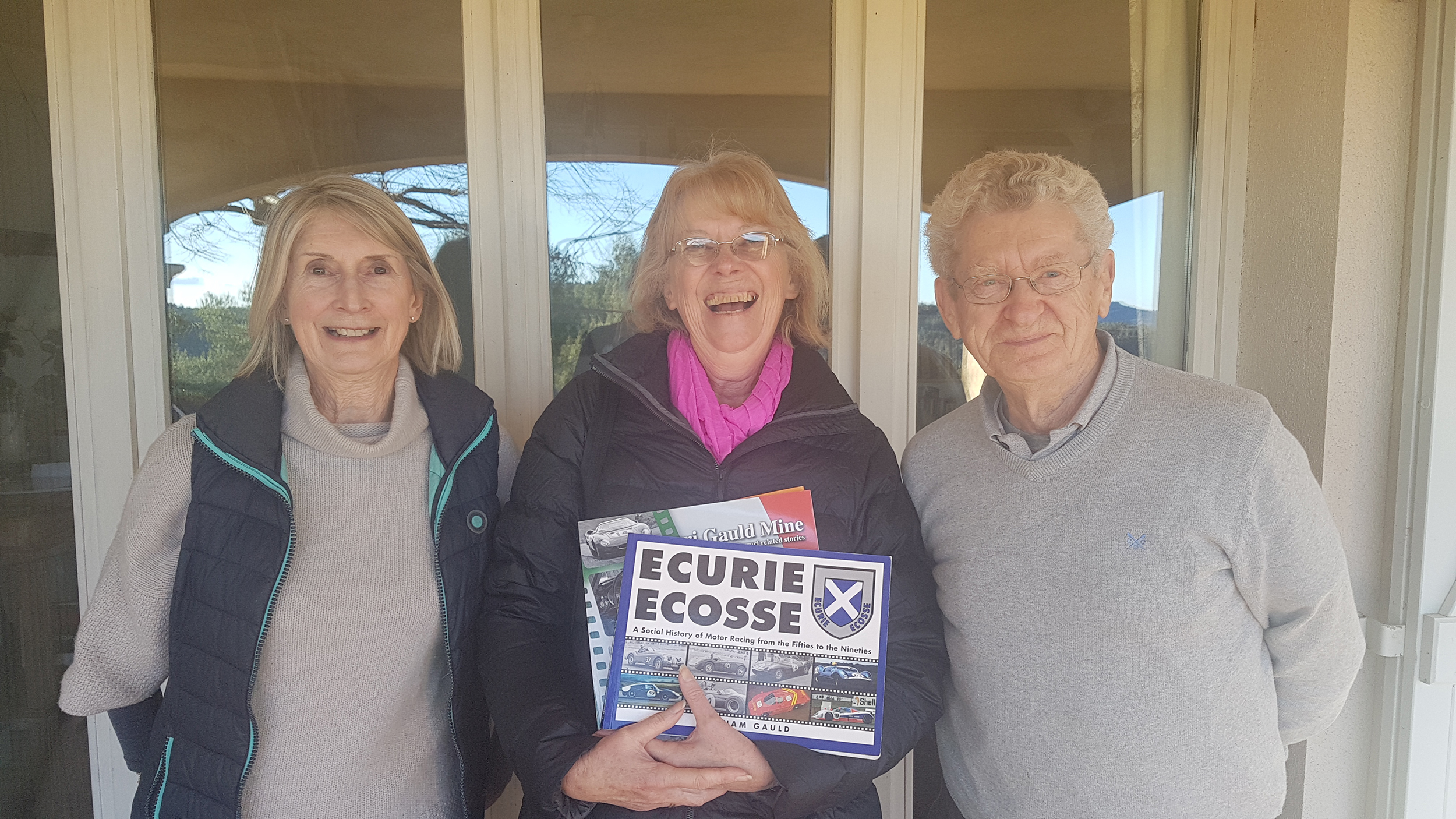 And this is an extract from the book: 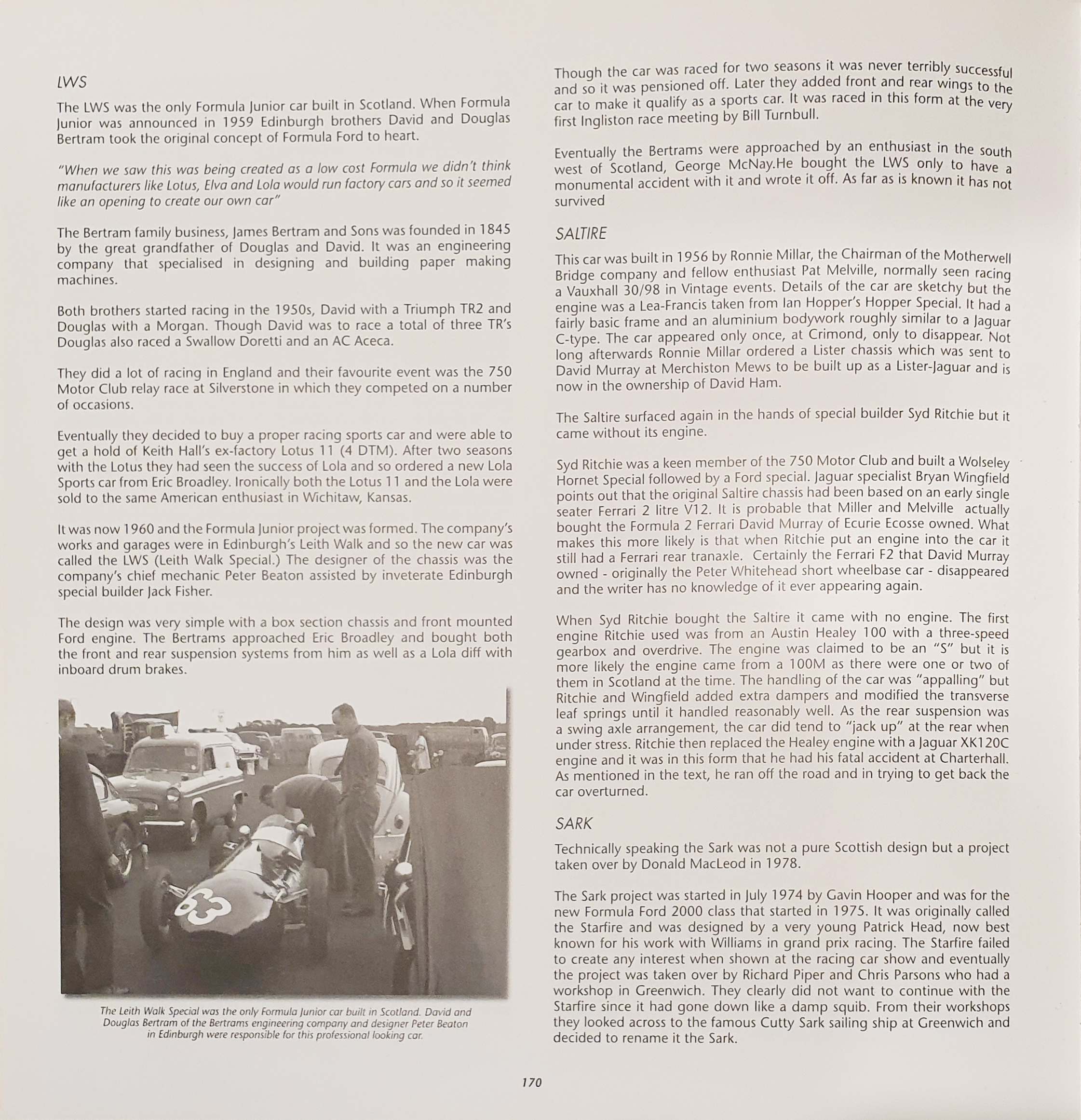 There is an excellent website which has a very complete history of sports car racing. Naturally Bim and his brother Douglas are featured. This is Douglas’ summary page:

It was a pretty diverse range of machinery with Swallow, Lola, Lotus, Morgan, Aston Martin and even a Daimler Conquest. The AC Aceca mentioned by Graham Gauld is not included in the website above.

The best placed finish was 3rd in the Lotus XI at Snetterton. Douglas was listed as driving with Bim at the Nurburgring but I’m pretty sure that it was just Bim and Eric Broadley – the founder and owner of Lola. Bim said he was pretty slow!

This is the summary page for Bim:

Its a great record with 12 podiums of which 4 were wins. The competition was pretty fierce and Jim Clark was a regular competitor at Charterhall in both the Ecurie Ecosse and the Border Reivers D Types as well as a variety of other machinery. This is a summary:

The full results are here.

There is a very complete record of the Lola Mk1 on the factory site. This account includes one of Bim’s wins in the car:

And this is the Motorsport account of the race by Denis Jenkinson:

Bill Turnbull not only looked after Bim’s cars he also was a driver in his own right running a Lotus Mk VI, a Mowog special, the Ecurie Ecosse D Type XKD501 which was the original car delivere to the team in May 1955, a Seatron (?) entered by William Seaton. He also did many more races in the LWS than the Bertrams including a 3rd outright and a class win at Charterhall in June 1964, a class 2nd in the September and October meetings.

The records seem a bit patchy but the car definitely enttered the first Ingliston meeting in 1966 .