We went out on March 5th and photographed it and it looked as though the floods had started to recede and we wouldn’t have quite such a big event as in 2021.

But then it started to rain again with some huge amounts being recorded across the Sydney basin and up it came again. All the photos are here.

And this time it was the largest since 1867 which was a good 4 meters higher still!

You can compare this with the cover photo taken on 5th.  A lot more water.

And to cap it off we had another flood in April.  We didn’t photograph it and went to the balloon festival in Canowindra instead.

This is the flood data published by the Hawkesbury Flood Statistics Unit. 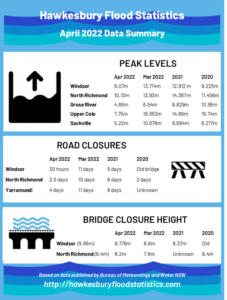