We were flooded again in the Hawkesbury with both North Richmond and Windsor bridges under water so it made sense to head west for the weekend.

Julie found this lovely 120 year old farmhouse with mud brick walls and metal ceilings for us to stay in.  About 15 mins north on the road to Orange it was a great place to stay.

The format of the event had changed since we were last here in 2016 with most of the competitions being held during the week and the weekend was more for fun stuff.

Saturday morning dawned fine after some heavy rain overnight and it looked like the balloons would fly.  The previous two days events had been cancelled due to the rain.

So we headed for the showground and that magic sight of all the canopies on the ground being inflated by petrol driven fans before the burners were ignited. 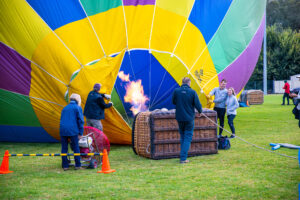 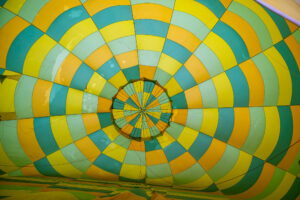 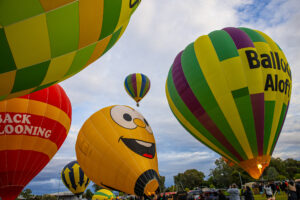 We chased the flock out of town and they flew low over a road lined with poplars – quite graceful as they scraped over the top of the trees. 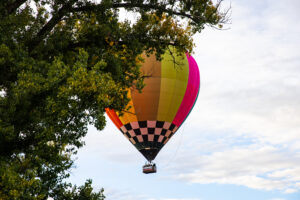 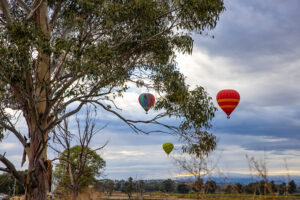 They eventually landed in a paddock on Fish Fossil Drive. 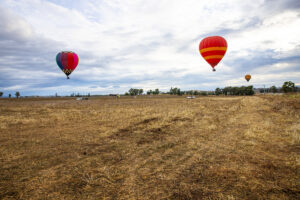 All the photos are here.

Everyone packed up and headed back to Canowindra for the parade through the main street.

We found a bench seat along the main street and a old Harley and a Moto Guzzi drove up and parked in front of us.

It belonged to a bloke called Chris from Molong. He was an ‘advisor’ in Africa in the 1970’s and no – he wasn’t part of Mad Mike Hoare’s lot – but you get the drift. Anyway he went to Ethiopea to pick up this ex-caribinieri bike and rode it back to Cape Town over the length of the African continent avoiding all the various troubles along the way.

Later on he rode it back to Australia with the last island hop being from Bali to Darwin. The original 700cc engine was rebuilt with new pistons and barrels and is now closer to 1,000cc. There is a secret document case under the front of the sidecar. The California Highway Patrol also used the bike so parts are not too hard to get. 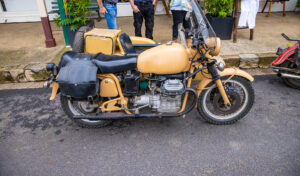 The parade then got under way with the balloonists firing up their burners from the trailers. 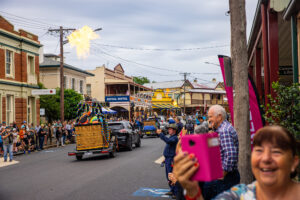 There were also some cars and agricultural machinery including a couple of Chamberlain tractors and they did a re-enactment of the Ben Hall Gang holding up a stagecoach.

This gang also captured the local policeman and held a three day party in the pub.  That was also re-enacted with today’s copper being a good sort and joining in the fun! 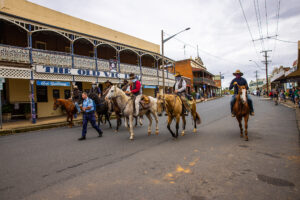 Clearly a popular event with the locals.  The pics are here.

We got there about an hour before and walked around the back of the balloons and found a quiet seat and a perfect vantage point for the event.

It was pretty dark and the concert was still under way as the balloons started up their fans to inflate the canopies.  The new Canon R5 does an amazing job of finding light which the human eye cannot see and this is the result: 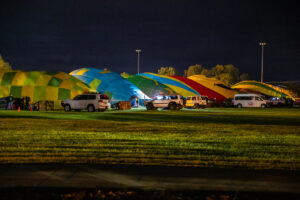 The exposure time for this photograph was 0.6 seconds and it was hand held! 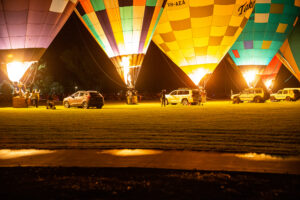 There is also some video on the Smugmug site.

Sunday morning they had what they described as a Key Grab which is an event where the balloons have to navigate to a foot long key mounted on top of a long pole.

When you consider the things go wherever the wind takes them that is quite a challenge!

Anyway for whatever reason the key was substituted for a cross on the showground with a cutout cider bottle in the middle of it and the objective of the event was to drop a marker closer to the centre of the cross than anyone else.  Only three balloons made it in very light and fluky winds. 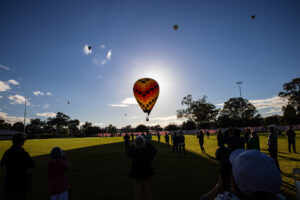 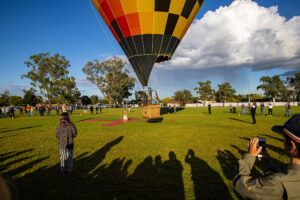 This one had actually thrown his marker in from a great height and missed thr cross.  Someone kindly retrieved it and he was able to drop it right on the spot.

Our expectatkion is that the ref would have ruled this out! 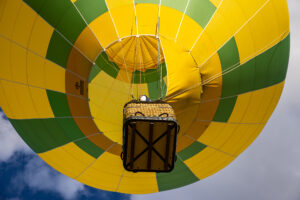 And we were beside this lady’s ground crew when she appeared overhead and was about to give up.  The ground crew prevailed on her to persevere and she dropped her marker dead centre.

This is the 2106 event where I think were the only ones to photograph the key being grabbed.

The folder with all the 2022 galleries is here.